My goals for this year…stay on top of things…like this blog. I have not wrote in forever, and so much has happened. I don’t want to write some loooonnnnggg drawn out post about the new year and my life the last 2 months, so this is my post about Alaina and her last 2 months of life. We have had a lot of firsts; first Christmas, first snow (she thought she had to eat it), first tooth (teeth: two bottom ones), first hotel stay, first New Year.  Things she is obsessed with; sticking out her tongue, opening cabinets, blowing raspberries, and watching Wheel of Fortune and Daniel Tiger. She is currently 8 1/2 months old (what?!?!, so crazy). 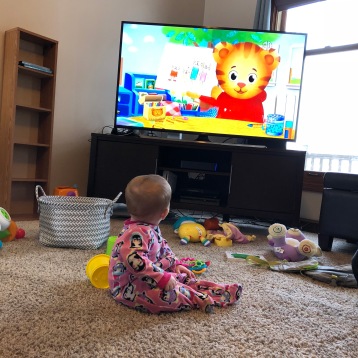 Alaina is crawling like a mad baby. Seriously, she gets into everything! She started crawling shortly after she turned 6 months old. We have a very determined, adventurous child on our hands. She isn’t happy doing something for very long. First she was happy because she could sit up on her own, then that became obsolete very quickly. So she started to crawl…a week later, that was not good enough and she had to pull herself up and stand next to furniture. A couple weeks later…not good enough, she has to walk along the furniture. Now, two days ago she started walking behind her walker. I have a feeling that we will have a walker before we know it. We learned quickly that we need to watch her at all times. Like, take your eyes off her for two seconds and she could be on the opposite side of the house…more than likely getting into something she shouldn’t be getting into, especially if she is quiet. A quiet baby is never a good thing.

Alaina has also found her voice. She has started to mimic us when we talk to her. Sometimes I think it is more mocking than mimicking…because it is often followed by laughter. (Side note, there is no sound sweeter than a baby’s laugh). She has said the words “hi”,and “yeah” for sure. I think she says “ma” at times…although that is coming from mom’s ears…and they are biased and may hear things at times. Mainly, when we ask Alaina to say “mama” or ‘dada” she sticks her tongue out and does raspberries. Then laughs. Oh baby.

Alaina celebrated her first Christmas. She had absolutely no interest in her gifts. There were 3 stipulations that she had to be interested in a Christmas gift: 1) the gift is not for her, 2) it is wrapped under the tree with a bow on it, 3) mom and dad say not to touch it. As soon as she had her own wrapped gifts in front of her to open, she showed little to no interest. Even after the gift was opened she would only want to find the smallest piece of wrapping paper she could find and play with that. I do have a side story…I had a mom fail moment. I was changing Alaina’s diaper. She was sick (more on that later) had really bad diarrhea, I opened her diaper and almost had a heart attack. There was red in her poop. Like bright red. As a nurse, you see red in a diaper and your mind goes to the worst possibly scenarios. My baby is bleeding internally. I was freaking out until I assessed the situation further. It was red wrapping paper. She had apparently ate a few small pieces of red wrapping paper when I wasn’t watching her close enough. Oops. And what goes in, must come out. I had to laugh at myself.  Anyway…I digress. Once her Christmas presents were all out of the boxes and she could play with them, she loved them. She loves this little monster that rolls around on the floor. And her my pal violet. 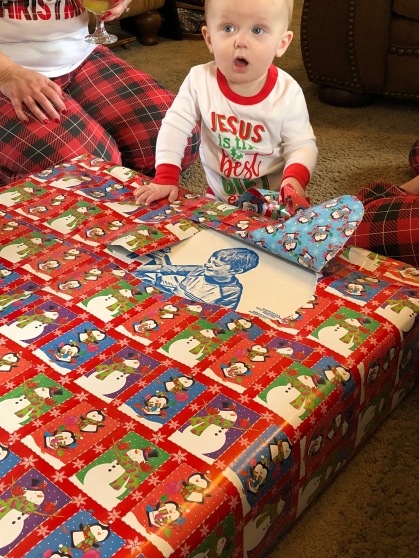 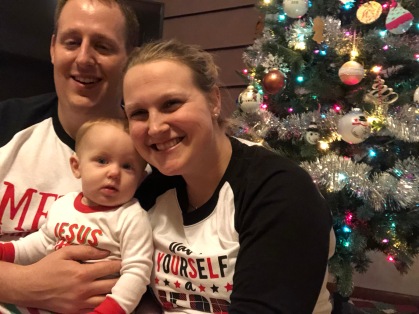 Alaina also had her first New Years, (We are no longer in the year my baby was born…I had a hard time with that one), and thank goodness she did not stay up till midnight. Heck, mama barely made it. We went to Detroit/Novi for New Year’s. We were worried about how it would go in a one room hotel room. But, we were up for the challenge. We got upgraded to a 2 room suite…I quickly became really glad we didn’t have to face our challenge anymore. I wimped out quick. Alaina had her own room, we didn’t have to hunker down with no lights at 8:00 anymore. I swear they pump something into the air in the hotel. Alaina went crazy. Like laughing while she was crawling and laughing like a maniac while we walked down the hallway in the hotel. It was so funny. The new place was so exciting. The main reason we went on this trip was because of the Christmas lights at the Detroit Zoo. It was amazingly magical. I know that is kind of redundant, but that is the perfect way to describe it. The entire zoo is full of Christmas lights. I have never seen so many lights in one spot. And I am obsessed with Christmas lights, they are my favorite. I could drive around for hours looking at Christmas lights. The only thing was that it was sooooo cold, like below zero cold. We had Alaina so bundled up, and we went through the zoo so fast. We would have loved to take our time, but we couldn’t. Oh well I guess we will have to go again sometime. 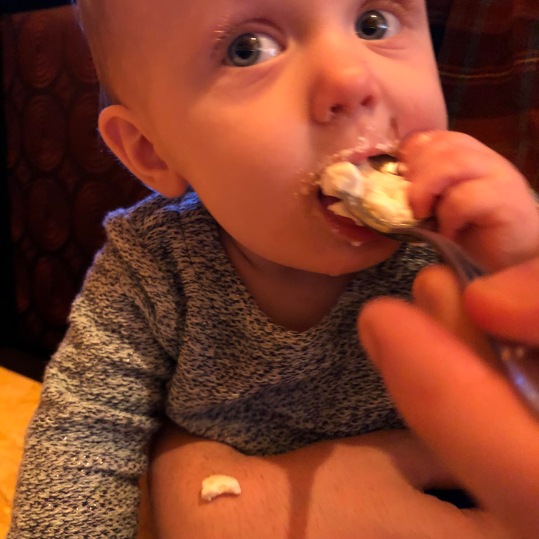 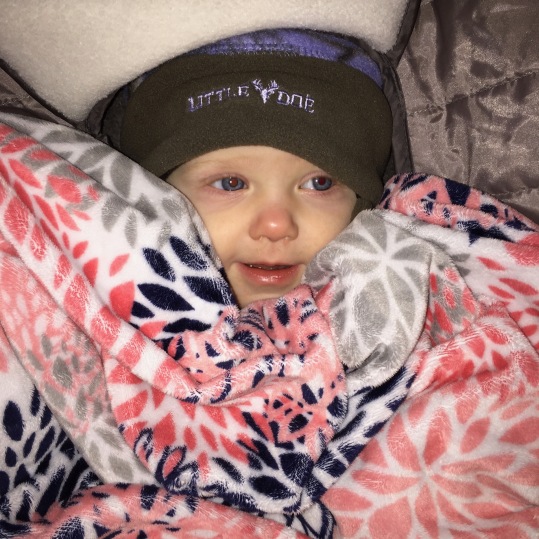 We also had some health scares right before Christmas. Jason had come down with the stomach flu, then about a week later, Alaina got it. Along with the stomach flu she got a horrible cold with fevers. It was the worst experience of my life. She couldn’t keep anything down and became dehydrated. We called the pediatrician and they sent us to the ER. They gave her some zofran and she was finally able to keep something down. So they sent us home. They said if she keeps throwing up after 2 more doses of zofran call the Dr.’s office again. Well guess who kept puking and was still super dehydrated? So dehydrated that she was lethargic. So the pediatrician sent us right back to the ER. This time they gave her IV fluids and IV zofran, they also made sure she didn’t have a UTI. It is horrible watching your baby get an IV. I actually held myself together, I have no idea how I did. Well, she seemed to turn the corner a little bit after that. It still took her about 3-4 more days to fully recover. It was a long week. On top of that, Jason and I were really sick too. I had the stomach flu and the cold, then got a sinus and ear infection, and Jason had a cold. I don’t think I have ever been so sick. It was horrible. I was so thankful for my families that week. The meals that were brought over, the trips taken with me to the ER, all were the greatest gifts ever. I don’t think I would have survived that week without them.

Alaina also loves to eat…everything. There are only two things she has not liked so far. Bananas, peas, and chocolate. Seriously…my daughter, it is scary. Things she loves, bread, pasta, and cheesecake. Seriously…my daughter. She will try any food. If we are eating something, she has to have it. And if she doesn’t get it fast enough, we have a screaming meltdown. Yesterday we ate lunch when Alaina was sleeping, I said to Jason “I am so excited that I get to eat without Alaina yelling for my food.” The things that make you happy as a parent. 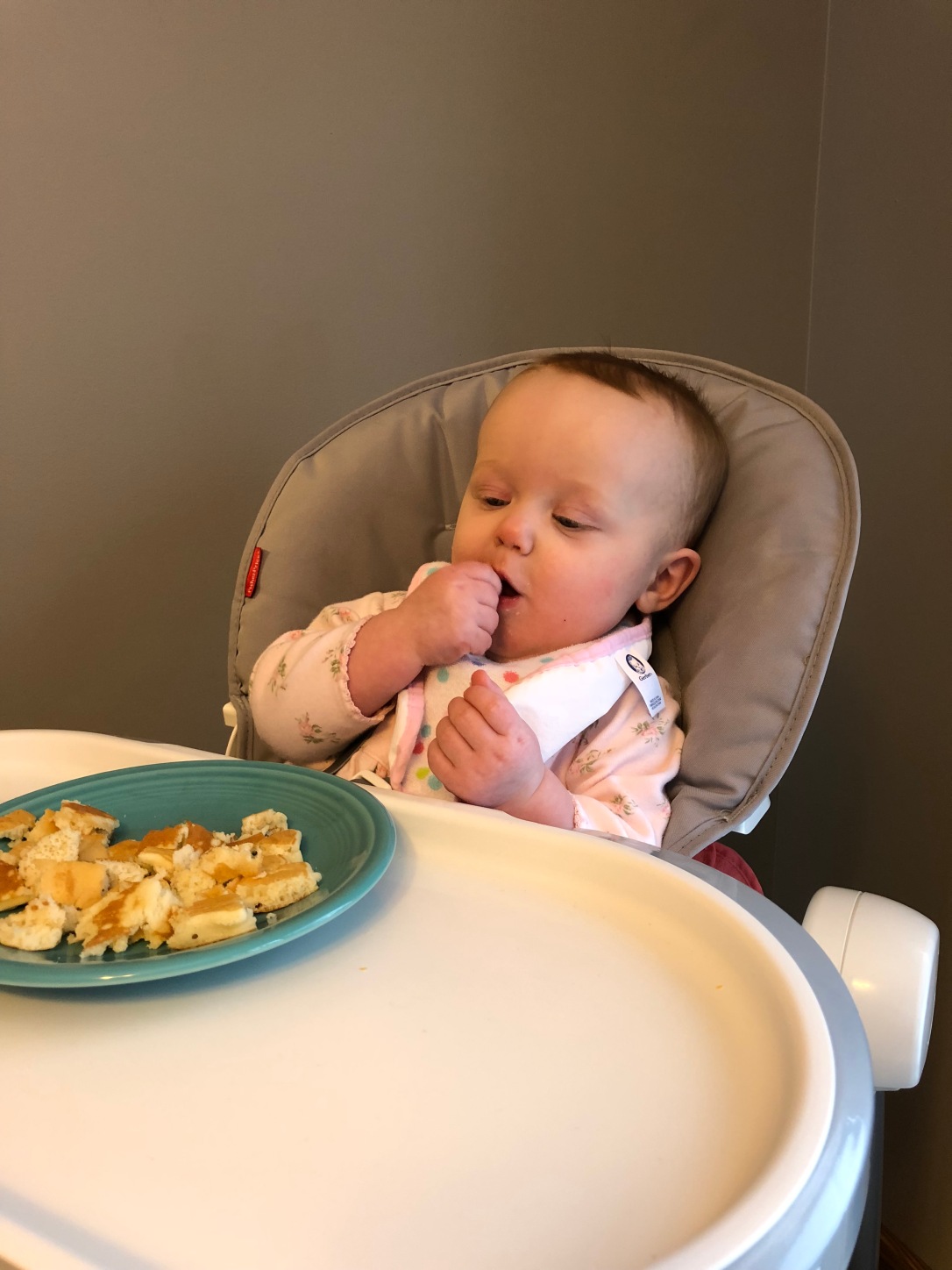 We can’t wait to keep watching Alaina grow. It is going so fast. But, I wouldn’t change anything. Our life is so fun. Horribly difficult at times, but so fun.

View all posts by gracefolkert